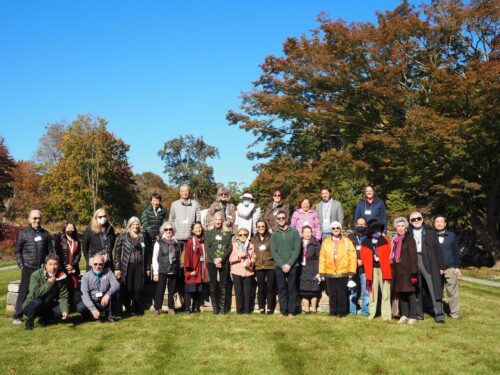 On Saturday, November 6, JHC welcomed the Japan Society of Fairfield County (JSFC) for a tour of the newly rehabilitated Jay Gardens and their annual meeting. The group enjoyed the rich display of autumn color and surprised JHC with the announcement that they have already raised $6000 towards installation of a magnificent allée of twenty-two Higan cherry trees that are central to Phase II of the Thomas Woltz landscape design! Historically, there was an orchard of Cherry trees at the landmark site which are referenced in mid-19th century letters and sketches labeled “Cherry Hill.” JSFC President Jackie Alexander explained that their organization hopes to complete fundraising in time for planting and dedicating the trees in Spring 2022.

The collaboration with JHC is part of the JSFC’s newly launched Sakura Manbon Cherry Tree Project. “Sakura Manbon” literally means 10,000 cherry blossom trees and the idea is “to spread goodwill and beauty throughout the Greater Fairfield County area” as well as “to give back and link communities together. The Japanese cherry blossom is a symbol of renewal and optimism, healing and hope. The extensive row of Higan cherry trees planned to parallel the Jay Gardens will also yield fruit for birds and ample pollen for bees.

Both JHC and JSFC have complementary missions to preserve and protect our shared cultural heritages and experiences. At the Jay Estate, there are many other historical and extant references that point to a longstanding admiration and respect for Japanese culture and aesthetics from a grove of plume and thread Japanese Sawara false cypress trees to the remains of a pagoda styled wellhead that JHC plans to rebuild with the assistance of students at Columbia University Graduate School of Architecture, Planning and Preservation (GSAPP).

After looking at the future home of the cherry trees, members of the Society assembled for a Champagne toast on the veranda and a bento box lunch.  The group then adjourned to the Jay Mansion Drawing Room to hear a riveting talk about water in Japanese gardens by landscape architect Takaya Kurimoto. Kurimoto’s major works include a Japanese garden at the Frost Valley YMCA in New York (2014) and a set of stone gardens for the “Tea Culture of Japan” exhibition held at the Yale Art Gallery (2009). He started off studying the philosophy and history of Japanese gardens very early in his career at Kyoto University, Japan. He has been exploring how Japanese gardens contribute to and become a part of the modern world since completing the Master of Landscape Architecture at Cornell University. He also taught the East Asian Landscape at the Yale School of Architecture as a lecturer.