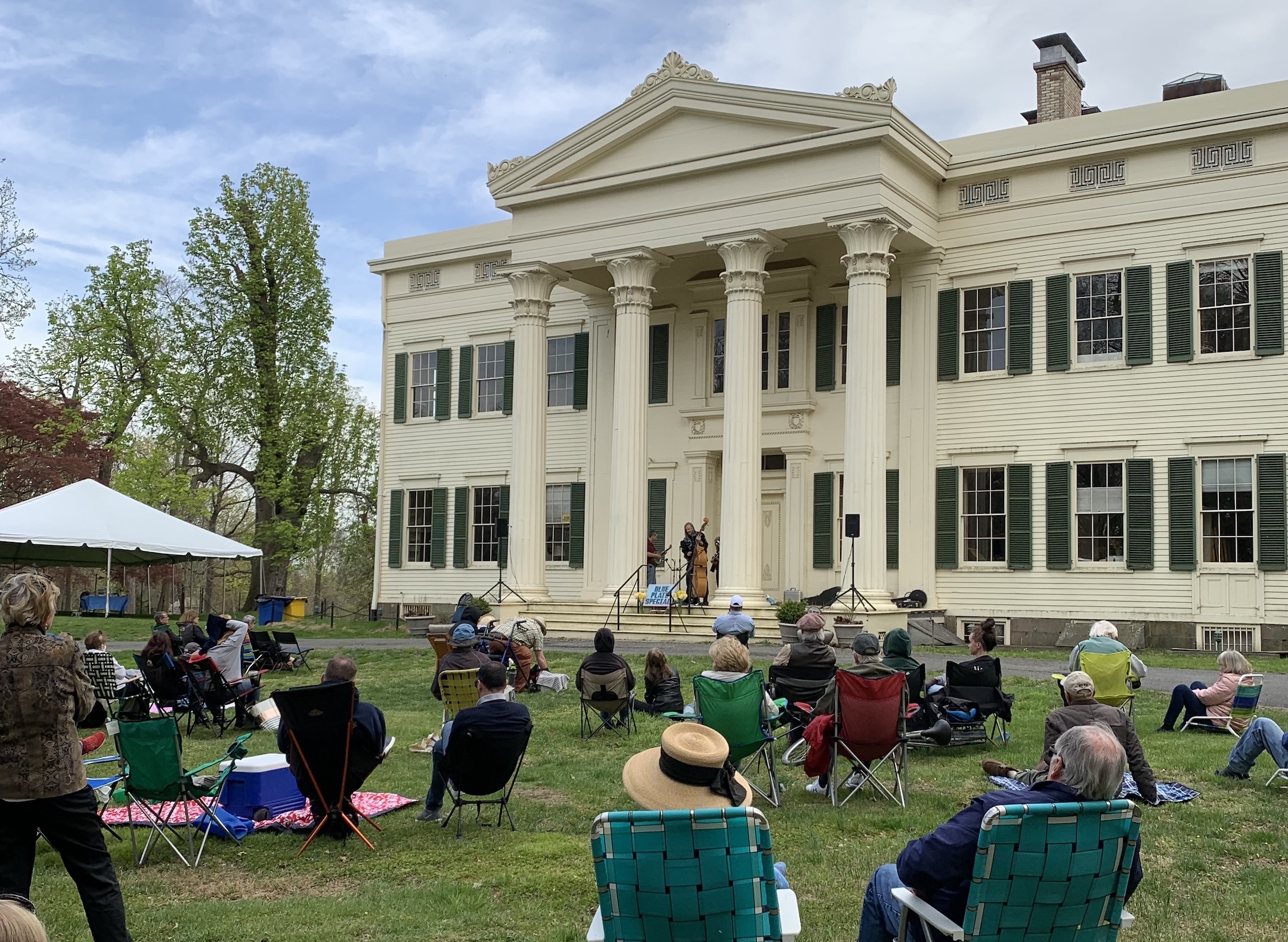 More than 200 concertgoers packed the circle in front of the 1838 Jay Mansion for a concert by the northern New Jersey-based bluegrass group Blue Plate Special–JHC’s first in-person program of 2022.

The early May weather–60s and clear with a slight breeze–could not have been more perfect. Before the event, guests ambled through the Historic Jay Gardens, which are now open every Sunday from 10 a.m. to 5 p.m.

Blue Plate Special’s sound weaves together “strands of bluegrass, blues, Cajun, and swing.” (Read more about the group here.) At times their performance, which included two 45-minute sets, had guests–otherwise perched on lawn chairs and picnic blankets–dancing in front of the large outdoor tent beside the mansion.

The Jams at Jay concert series has been a favorite in recent years at JHC. Hundreds of people poured into a summer Woodstock tribute in 2019, and the popular group Bandits on the Run, featuring Regina Strayhorn, Sydney Shepherd, and Adrian Blake Enscoe thrilled the crowd last summer. JHC is planning to host the next Jams at Jay concert in August 2022.

When Jay Friedman was 8, her father bought her an electric guitar, which she promptly traded in a for a nylon string acoustic model.   Influenced by the folksy sounds of the Clearwater Musical Festival in nearby Tarrytown, NY, she got the bug to play any instrument she could get her hands on and learn every song blasting on her AM transistor radio, (which usually meant adding a harmony to a Motown tune). While living in Ann Arbor, MI, she studied ethnomusicology, with a focus on women in country music and began to write her own material.  Returning east, she had a brief stint at RCA Records, (where she learned to make coffee and photocopies).  Her exposure to amazing recording artists fueled her passion for all things bluegrass and country! After relocating to northern NJ, Jay met kindred musical spirits and formed Blue Plate Special.  Collaboratively they wove together the strands of bluegrass, blues, Cajun and swing with a fresh new twist, performing all over the tri-state area. Jay’s songwriting has ranged from the upbeat   “Bluebird of Happiness,” to the heartbreak of “Nothin’” and everything in between. Jay realized early on, that their first CD, “Nowhere Fast” was anything but a self-fulfilling prophecy. It didn’t take long for a song to be picked up by a public radio station and two tunes to be featured in PBS  documentaries. One day, the legendary Les Paul came knocking on Jay’s door (the front door, to be specific – true story ) along with an invitation to Blue Plate Special to  play onstage at The Iridium in NYC. Jay has been thanking her lucky stars all along the way.  She continues to be especially grateful for the ridiculously talented boys in the band, who play, sing, write, arrange, record, produce and make it all come to life.  She is thrilled that once again the band truly is, “Back by Popular Demand.”

Dave Gross plays the mandolin, sings and writes some of the songs for Blue Plate Special. He also contributes his engineering and arranging talents to the bands latest release “Back By Popular Demand.” Dave has been a pretty busy boy, playing music whenever and wherever he can. From an amazing show he played at Sweetwater Music Hall with Bob Weir and Sammy Hagar, to unforgettable experiences with the Hip-Hop Bluegrass band Gangstagrass at Grey Fox Bluegrass Festival, Rhythm and Roots, and the IBMA, Dave gets around. Dave’s latest passion is Gypsy Jazz – the music of guitar virtuoso Django Reinhardt. His study of the genre led to the project Mandology where he teamed up with Olli Soikkeli, Luke Hendon, Rob Hecht, and Ben Ruben to record a sweet CD. Dave spent more than a decade as a DJ at WFDU int the New York area hosting the popular bluegrass show “On The Sunny Side”. He had the pleasure of interviewing many of his main influences such as Vassar Clements, and Sam Bush.

Tom Wise’s Midwestern musical roots come through as he keeps it on overdrive on his doghouse bass.  It was in fact, the nuns from his Catholic school who put both a ukulele and a harmonica in his hands, which he quickly learned to avoid getting whacked. His education paid off when Tom arrived as a college student in Ann Arbor Michigan.  As it was the hayday of Ann Arbor’s country music scene with bands like Commander Cody and his Lost Planet Airmen.  Tom played bass with legendary bands such  as The Cadillac Cowboys, The  Tillson Pearson Band, and The Nukabillies. Tom has penned many a sentimental song like “Canton, Ohio” and “Cut Her Off,” both tales from his childhood on the Great Lakes.   “Ship Comes In” combines a Bo-Diddly inspired beat with a bluegrass refrain. “Can’t Put My Finger On It” is a nod to Delta style rhythm and blues.   And while Tom has got the beat in his pocket, he is often putting a killer harmony onto a song, making it richer in every way.  Sister Rose and Sister Francis can put their rulers down.

Nick Conte began playing guitar at the age of thirteen after hearing The Rolling Stones “Exile on Main Street.” Nick’s focus remained on classic rock for many years leading to him joining central Jersey cover band Brother John Brown in which he remains a member. As his musical journey continued, Nick’s musical taste began to broaden thanks to the likes of Gram Parsons and the New Riders of the Purple Sage. He soon found himself traveling down the rabbit hole into the world of country and bluegrass music. Before long it was cowboy boots and embroidered shirts. In March 2019, Nick joined Blue Plate Special as lead vocalist and guitarist adding his original material to the group. Nick is also a member of bluegrass band Dan O’Dea and Eagle Ridge. He has played numerous times at the New Jersey Folk Festival and has shared the stage with Tony Trischka, Mike Mumford, and Bennet Sullivan. He has also opened for Big Brother and the Holding Company, Jeff Austin, and Mark Karen of Bob Weir and Ratdog.