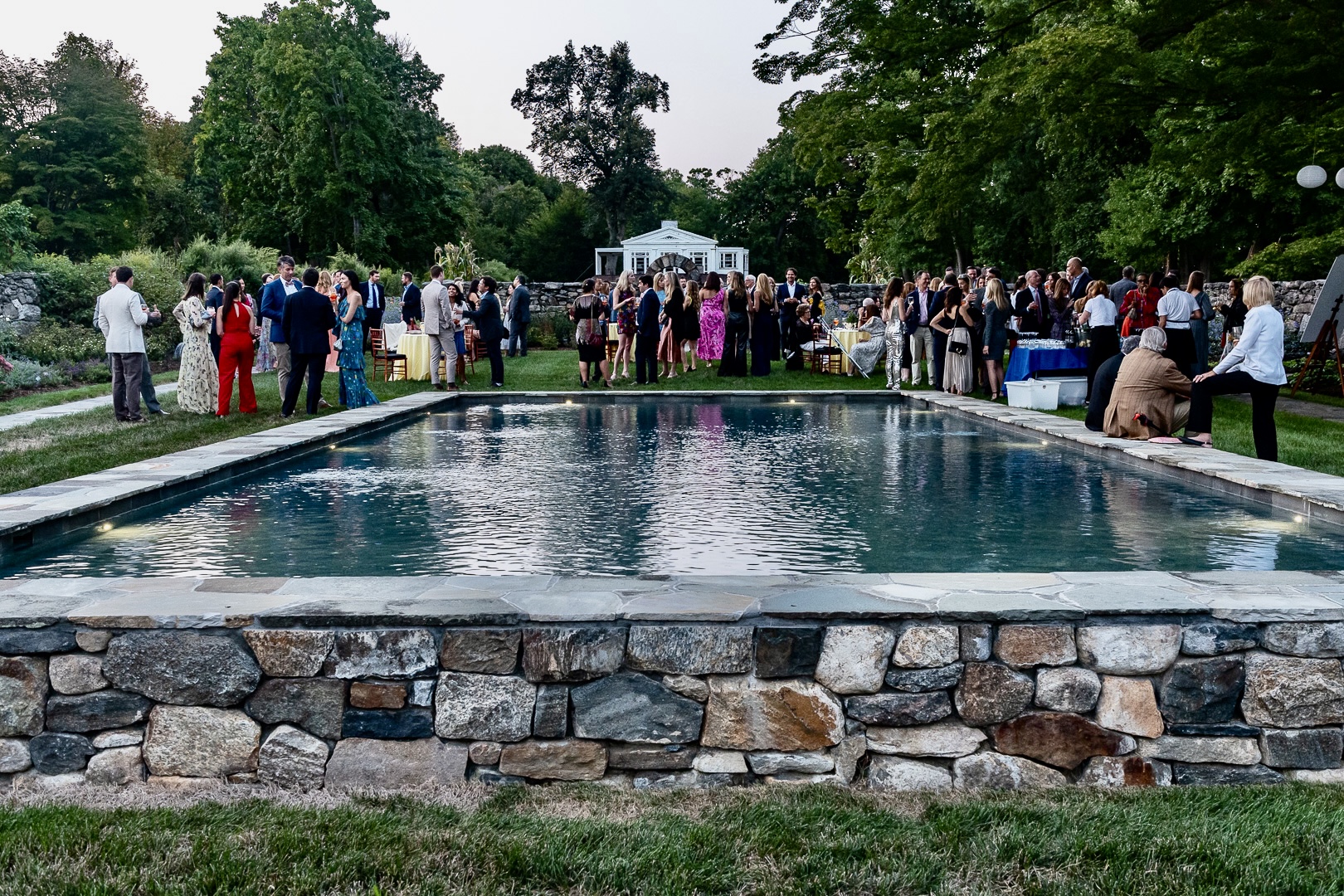 Nonie Reich, daughter of Deedee Paschal, one of those trailblazers, took the crowd back in time as she remarked on the course that JHC navigated and praised the bright trajectory that they have ahead of them! A live auction of bespoke dinners and a green electric MOKE were highlights of the party co-chaired by another 5 dynamic women – Christie Bonasera, Aileen Burdick, Suzanne Clary, Lindsay Martin and Caroline Walker.

These remarks were delivered at JHC’s 30th Anniversary Moonlight Soirée on September 17, 2022 by Nonie Reich, daughter of one of JHC’s founders:

Thirty years ago five women succeeded in founding the Jay Heritage Center: Kitty Aresty, Catherine Crean, Karen Kennedy, Rhoda Kornreich, and my mother, Deedee Paschal.  I cannot fully grasp what drove them, the hope that kept them going during their 10 year pursuit to keep this site from becoming another housing development.  When they set out, I doubt they foresaw what would become a herculean effort to preserve this beautiful open space and retain an important part of Rye’s history.

Back then, the buildings were barely visible behind trees and vines, and a large, ugly dirt-berm had been erected just behind the house.  The roofs and windows were in extreme disrepair, there was water damage and vandalism throughout. But the columns, porches, rooms, the stateliness and beautiful proportions, stood against all that, longing once again to look out over this lovely vista.

I do remember when “the five” realized that forming a coalition, The Jay Coalition, was the way forward.  At the time, a coalition was a novel approach to gaining local political victory, bringing environmentalists, preservationists, and historians together with one voice, an idea I believe was first floated by Sharon DuBois, married to Jay descendant John DuBois until her passing this August.

And these five women were each as different from the other as one could imagine. What made them believe they could hold themselves together as a team, much less believe that any of this was achievable?

Something came to me the other day and it may hold a key, about my mother, at any rate.  Caught in a drenching downpour, thoughts condensing around the past, I remembered that, more than anything, my mom loved a good submarine story.  She loved everything about submarines: officers in cramped, steamy quarters; fuming, claustrophobic disagreements; torpedoes whizzing past and the threat of imminent annihilation; subversion and righteousness encapsulated in steel.

And I think of them now, those wonderful women: periscope up ladies, limited information on the horizon, target within range–you got this!

My mom died in the early days of Suzanne’s tenure, so she could not see the remarkable progress over the last 20 years.  Suzanne’s leadership has been exceptionally creative, operating on all fronts.  National Historic Landmark status was granted in 2005.  Restoration on the house and outbuildings has continued steadily, with renewable energy sources implemented whenever possible.  Careful stewardship of the surrounding 32 acres–the meadows, the stone ha-ha walls, the apple orchard and elm tree allée–all culminated last June with the celebrated opening of the historic Jay Gardens, thanks to a $500,00 grant awarded by the Regional Economic Development Council in 2014.

But most importantly, through extraordinary leadership of the board at the Jay Heritage Center, new space has emerged for engaging discourse on African American history and social justice through its school program “Striving for Freedom,”  through its ongoing invitation to key speakers and historians on the topics of reform, and through its inclusion in 2019 in the African American History in Westchester Commemoration Committee, marking the 400th anniversary of the arrival of the first enslaved Africans to the English Colonies in North America in 1619.

What would my mom say now?  Well, I think she would be speechless, but she might manage to say, “Job well done.”

The mission is never complete.  Periscope down, full throttle ahead.  And Godspeed.