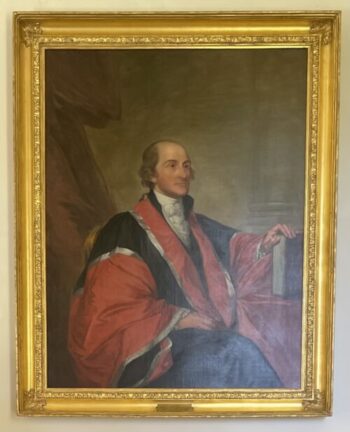 An iconic painting of John Jay, America’s first Chief Justice, clad in his black and scarlet silk judicial robes, has been donated to the Jay Heritage Center (JHC) in Rye, N.Y. Painted in 1818 by renowned portraitist John Wesley Jarvis, the artwork has been on display for the past 40 years in the Diplomatic Reception Rooms at the U.S. State Department in Washington, D.C.

The painting, which was modeled after a 1794 version by Gilbert Stuart that now hangs in the National Gallery, was donated to JHC by James Jay Davis, who is a Jay family descendant. His mother, Harriette Bruen Davis, had loaned the Jarvis artwork to the State Department indefinitely in the 1980s.

Jay first sat for Stuart in London in 1783, after negotiating the Treaty of Paris that ended the American Revolution, but the portrait was not finished until eleven years later, in 1794. By this time Jay was using his diplomatic skills to broker yet another treaty that would ultimately bear his name. The painting was deemed so handsome that it helped persuade George Washington to sit for his own portrait with Stuart.

Jay later asked Jarvis to execute a copy as a gift for his sister’s son, Peter Jay Munro, who lived in Larchmont not far from the Jay Estate. According to Bryan John Zygmont, author of Portraiture and Politics in New York City, 1790-1825: Gilbert Stuart, John Vanderlyn, John Trumbull, and John Wesley Jarvis: “Of all the portraits Jay could have commissioned a copy of to present to his nephew, this was a most appropriate choice. It was, after all, Peter Jay Munro who originally wore the robes in Jay’s stead so that Stuart could finish the portrait while Jay was in London negotiating the Jay Treaty.”

This is the second Jarvis artwork that has been donated to JHC in recent years. In the summer of 2021, the children of Jay (Peter) Pierrepont Moffat, Jr. donated a Jarvis portrait of Jay’s son Peter Augustus Jay, in honor of their father and their mother, Pamela Dawson Moffat.

Jarvis captured the likenesses of many notable Americans, including novelist James Fenimore Cooper, patriot Thomas Paine, and War of 1812 naval hero Oliver Hazard Perry. Jarvis is also known for his poignant portrayal of father and son Native American Sauk warriors Black Hawk and Whirling Thunder, who were imprisoned after organizing deadly battles resisting the U.S. government for seizing their tribal lands in 1832. Jarvis’s paintings can be found in the collections of the Metropolitan Museum of Art, the National Portrait Gallery, and elsewhere.

JHC will host a reception at the 1838 Jay Mansion in Spring 2023 to celebrate the new arrival of this portrait and others yet to be announced. More details coming soon.