When Edgar “Pedlar” Palmer, a 1903 engineering graduate of Princeton, purchased the Jay Estate in 1911, he undoubtedly knew that he was buying a home with Princeton associations.  Sarah Jay’s uncle Peter Van Brugh Livingston had been an original trustee of “The College of New Jersey” the precursor of Princeton. Other alumni known to Palmer like Junius Spencer Morgan II or J. Frederick Talcott, both Class of 1888 had also lived or spent significant time at the Rye residence.

As avid and accomplished sailors, both Edgar and his wife Zilph were now occupying the waterfront home of one of the founders of New York Yacht Club, complete with its own miniature Station 10 styled cottage with views of Milton Harbor. The parcel which included Henn Island was conveniently located across from American Yacht Club, where Edgar would soon serve as Commodore.

Palmer ordered one of the first classic NY 40s designed by Nathanael Herreshoff – he named the boat Zilph after his wife and daughter and raced it with brother-in-law James E. Hayes, also a Princeton graduate. Zilph was victorious in the very first race of these new one-design 40 foot yachts in May 1916. The Palmers enhanced the buildings and grounds according to 1917 plans surveyed by Brinley and Holbrook. One year previously, work on an Indoor Tennis House constructed with the help of AYC member Ralph Crow was built. The gardens at the Jay Estate during this period were lush and beautiful. A young Zilph took a photo of a woman, possibly her mother, sitting under a long rose arbor. The gardens were opened to the public on many occasions:

Today only one garden will be shown by the Westchester County S.P. C. C. but that one is the home of Mr. and Mrs. Edgar L. Palmer, “Alansten,” on the Post Road in Rye, a beautiful old Colonial mansion, formerly the old Jay estate and, if tradition is true, the place where J. Fenimore Cooper wrote the major portion of his novel, “The Spy.” Near by is the old family burial plot of the Jay family, surrounded by guardian trees, and visitors of historic bent may go to that as well. The garden visitors of previous years cherish memories of the inclosed garden of Alansten with sundial and paved paths and roses and shrubbery, of the stately trees and of one majestic elm in particular which experts claim is one of the finest of its species; of the old, box-bordered gardens, of the low-crowned apple orchard of which Mr. John Connor, the Superintendent, is justly proud; and of that air of quiet serenity which only old long-tended gardens possess, the hedges which only time could bring to such perfection, the lily beds which have spread over many years until they are a thick mat of glossy green and pearly white bells peeping out beneath, the trees which have watched the march of years.

Those who did not visit “Alansten” when it was shown before have a new pleasure awaiting them, those who have seen it will need no urging to repeat the visit this year.” Shortly after moving to Rye, Edgar eagerly welcomed classmates to visit. Ten years after graduation he extended this invitation to alumni

“If, at any time, members of the class are passing Rye, on the Boston Post Road, I would consider it a great pleasure if they would pause a moment and have a glass of refreshing spring water, or something like that, with us. The latch string is always out for the Class of 1903.”

Edgar was one of the first members of the Princeton Alumni Association of Southern New York and Connecticut when it was formed in 1914 with the mission of “spreading Princeton literature and spirit and promoting good fellowship generally.” He served on their Executive Committee, and hosted the first Princeton – Yale Midsummer Outing in 1915. The day was favored by fine weather, good natured rivalry and high attendance of over 150 men for activities including 2 baseball games, a tennis tournament, relay races and a tug of war followed by a banquet inside the club house.  It was such a success that it was proposed to be an annual event.

Like the Jays, Van Nordens and Talcotts before them, being close to family was important. The Palmers hired Aymar Embury II to build homes for two of Zilph’s siblings, Helen and James – one on the corner of Bradford Avenue and the Post Road across from the Jay Estate and one closer to the water with a dock. Zilph’s widowed mother Anna lived nearby as well.

Philanthropy During World War I and II

During World War I, Edgar Palmer served as the Chairman of the Westchester County War Fund Committee whose motto was “Give Where You Live.” Zilph helped raise funds as did her brother-in-law E. H. B. Watson who was Vice-Chairman. It is therefore not surprising that the Palmers also donated their prize schooner Guinevere to the Navy to serve as an auxiliary vessel. The boat was lost on the coast of Brest but Palmer built a second Guinevere. This second iteration was also a three masted schooner but with the first system of diesel powered electric engines on an auxiliary yacht giving her unprecedented maneuvering abilities. The electricity generated powered her steering and rigging lines as well as lighting and other creature comforts. Modern day sailors would marvel at her flying bridge with dual wheels located at the main mast allowing the helmsman to sit to leeward to see her sails. Competing against yachts designed for racing, she made a strong showing in a famous 1928 transatlantic race for the King Alfonso’s Cup in Spain, placing third. Certainly her Princeton tiger bowsprit was also memorable. This legendary schooner is depicted here at her launching out of Neponset with a full crew and Princeton classmates of 1903 of Palmer’s aboard. The banner draped across their laps hails Princeton as well.

Like his first prized yacht, Palmer donated the second ship to the Navy when the United States entered World War II. In fact in 1942, many yachtsmen including future NYYC Commodore Chauncey Devereux Stillman (whose wife Theodora was a Jay descendant) generously donated their vessels like Westerly for duty. German submarines and saboteurs posed a serious danger in coastal waters; with a shortfall of ships, the Navy relied on auxiliaries to help detect enemy activity. These pleasure boats were painted gray and black, sometimes outfitted with artillery and sonar devices but they didn’t have the firepower of escort destroyers. Because of their vulnerability and use as decoys, they were often called part of the “Suicide Fleet” by their crew. Imagine being a young sailor thinking you were going to be assigned to a destroyer and ending up on a sailboat in the midst of enemy waters! Guinevere served 3 years of special escort duty including performing U-boat patrol.

The legacy of Edgar Palmer and his family at Princeton is well known. Edgar’s father Stephen Squires Palmer noted the “absolute necessity of extending Princeton’s usefulness in the field of science and of placing her in a position where she can respond to the demands that will be made upon her.“* He donated the funds for a Physics Laboratory that was ultimately critical to the Manhattan Project‘s weapons research in WWII. Edgar’s donations to improve student life at his alma mater included funds for a new building for University Cottage Club, (an organization coincidentally co-founded by Grace Talcott’s brother J. Frederick Talcott, ’88) erection of Palmer Stadium, the creation of Palmer Square and more. 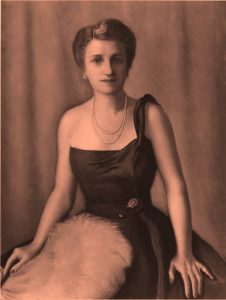 Edgar was not the sole philanthropist. Zilph independently instituted an annual scholarship for two Princeton seniors providing a stipend “to afford the recipients an opportunity to broaden themselves by travel, study and by life” in other countries. This commitment to education lives on. After the death of her husband Edgar and brother James, Zilph Palmer together with her sister Helen established the James Hayes-Edgar Palmer Prize in Engineering at Princeton – the award recognizes the member of the senior class who has demonstrated excellent scholarship, capacity for leadership and the promise of creative achievement in this challenging technical field. The prize is still awarded today. The 2020 winner was Nicholas Johnson who was also valedictorian of his class.

*Fittingly the home that the Palmers enjoyed for more than half a century is a testament to innovation in engineering with a landmark geothermal heating and cooling system – it is the first National Historic Landmark (NHL) building in all of Westchester to have such a system and at 184 years old, it is the oldest NHL in New York State with this advanced science.