Peter Augustus Jay (January 24, 1776 – February 20, 1843) distinguished himself as a successful lawyer, anti-slavery advocate and philanthropist.  He was the first child of John and Sarah Livingston Jay, one of 6 children and one of two boys –  his brother William was born thirteen years after him in 1789. Three sisters survived into adulthood: Maria (b. 1782), Ann (b. 1783) and Sarah Louisa (b. 1792). A wealth of correspondence between these family members anchors many of the historical events we know today.

Peter was born at Liberty Hall in Elizabethtown, New Jersey in the same year as the independence. He lived with there with his grandfather William Livingston, the Governor of New Jersey and his grandmother Susannah French while his parents were abroad from 1779 to 1784. Predictably, his grandparents and aunts doted upon him in John and Sarah Jay’s absence. Like his father, Peter excelled at his studies and eventually attended Columbia. Immediately following his graduation in 1794, he acted as private secretary to his father in London for the Jay Treaty – he would serve in this role as his father’s closest advisor for the rest of their lives. Upon his return , the young Jay studied law and established a practice in New York City with his cousin Peter Jay Munro, carrying on a family tradition of public service.  At the age of 31, he married Mary Rutherfurd Clarkson, daughter of General Matthew Clarkson, in 1807 and they had 6 “handsome” daughters and two sons. (Photo – Portrait of Mary Rutherfurd Jay, Gift of Sharon and John Jay Du Bois)

“You would do well to assist your uncle in planting trees at Rye. There are places in several parts of the farm where I think it advisable to put Locust trees. As to our garden – the rows should be filled – and some elms should be planted – manage those matters as you please – the trouble shall be yours – the expenses mine.”

John Jay deeded the family’s country residence to his eldest son Peter in 1822 though original account records show that Peter was helping to manage the farm at his father’s instruction as early as 1797. Letters between the two demonstrate a love of the land and knowledge of horticulture. According to original account books, by 1814, Peter’s wife Mary Rutherfurd was handling household expenses for the Rye estate – from fuel to wages to groceries and “sundries” to facilitate entertaining family and friends. She consulted her uncle Rutherfurd for advice about building an icehouse.

In 1836, seven years after his father had died, Peter Augustus contracted with a builder, Edwin Bishop, to take down the failing farmhouse that had been barraged by the British during the Revolutionary War. Reusing structural elements from “The Locusts”, Bishop and his carpenters constructed the grand Greek Revival mansion that stands there today. Peter was charged with finding the fine marble mantelpieces for the house and Mary planned the gardens in English style.

Unfortunately Mary would not live to see the house completed. Her health failing, a trip to Madeira was recommended and she died there on December 24, 1838.

Though despondent, Peter Augustus and his family continued to fill the Rye home and its many bedrooms with guests. Carriages would arrive with cousins from Bedford and friends from New York for week long stays. Meals included choice Madeira wines, syllabubs and ice cream, vegetables from the gardens that Mary had planned and orchard fruits grown on the estate. (Photo – 1813 – 1824 Account ledgers of Mary Rutherfurd Jay, Gift of Illona Wells Sambisivan)

Peter’s legal practice flourished, first with his cousin Peter Jay Munro and later with his mentee, then partner James I. Roosevelt. Other young attorneys like Hamilton Fish were trained in his office. His successful practice was primarily comprised of real estate transactions and litigation over mortgages and trusts as well as handling affairs for his father and family. One of the most famous cases of his career centered on a dispute over a will in which prominent lawyer John Leake left his fortune to a friend’s son, Robert Watts with the condition that the young man legally change his name to Leake or forfeit the sum and an orphange be built instead- Watts died before he could comply with the terms and the fortune went to the orphanage but not without a contest of the will first. Jay’s court victory proving the will was valid led to the creation of the largest charities of its time for children – this non-profit still exists today as a child care agency named Leake & Watts.

Peter Jay’s legal acumen complimented his business and charitable endeavors. From 1812 to 1817, Peter Augustus Jay helped found The Bank for Savings (thereby contributing to the establishment of the New York State savings bank system). As a Federalist, he was a member from New York City of the New York State Assembly in 1816, during which time he was active in arranging the financing for the construction of the Erie Canal. From 1819 to 1821, he served as Recorder of New York City and in 1828 helped found the New York Law Institute which today is the oldest law library in New York City.

His philanthropic work included terms as President of New York Hospital (1827–1833), Chairman of the Board of Trustees of Columbia University and Trustee of the General Theological Society.  As President of the New York Historical Society (1840–1842) he realized early on that the printed record of the revolution held immeasurable importance and should be preserved. “A file of American newspapers is of far more value to our design than all the Byzantine histories” and so he donated a cache of his own accumulated pre- 1820 periodicals.

His associations with intellectual groups and pursuits were many  – together with his father he enjoyed membership in the American Antiquarian Society and similarly with his own son John Clarkson he supported the New York Lyceum of Natural History (today’s New York Academy of Science).

Jay was well regarded as an orator. He is best known for giving a speech in 1821 at the New York State Constitutional Convention as a delegate representing Westchester County; he argued that the right to vote should be extended to free African Americans. Despite his impassioned argument, Jay’s motion for extending suffrage was overruled.

“Mr. Chairman, I would submit to the consideration of the committee whether the proposition of the gentleman from Saratoga is consistent with the Constitution of the United States. That instrument [the Constitution] provides that “citizens of each state shall be entitled to all the privileges and immunities of citizens in the several states.”…….Now, sir, is not the right of suffrage a privilege? And can you deny it to the citizen of Pennsylvania, who comes here and complies with your laws, merely because he is not six feet high, or because he is of dark complexion?” 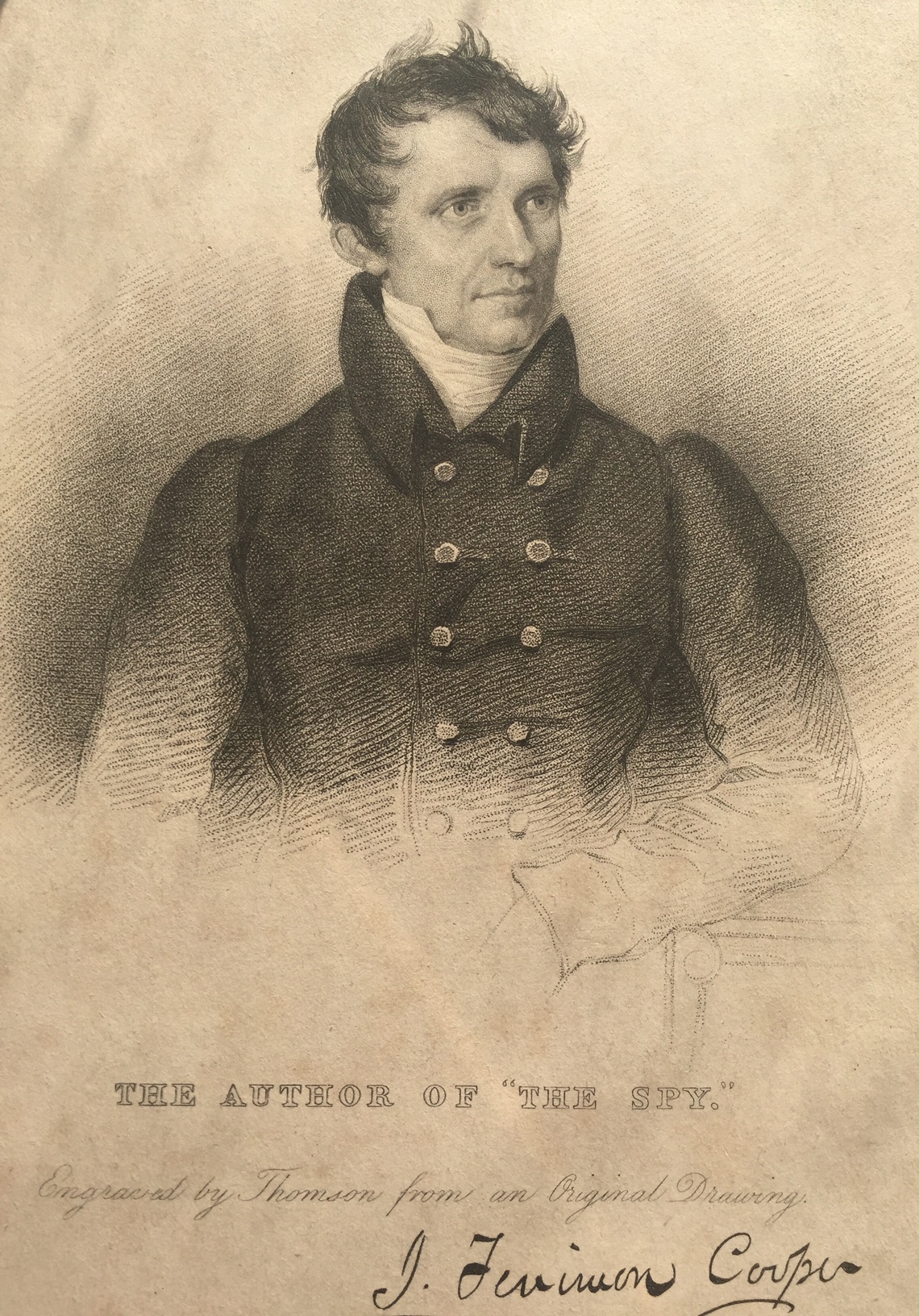 The very fond friendship between James Fenimore Cooper and the Jay family is well documented. Cooper attended Yale briefly at the same time as John Jay’s youngest son, William, but he was also very good friends with Jay’s eldest son Peter Augustus, a friendship that by Cooper’s own account spanned 40 years. The two shared intellectual and cultural interests as founding members of the New-York Athenaeum in 1824. They also enjoyed lunches in the city through the “The Bread and Cheese Club” a short-lived but jovial literary society that Cooper also helped initiate about 1824 – other mutual friends included Samuel F. B. Morse, William Cullen Bryant and the painter John Wesley Jarvis.

In addition to serving as Cooper’s legal counsel from time to time, it was Peter Jay who helped “cater” a lavish farewell banquet for Cooper on May 30, 1826 together with Chancellor James Kent before the writer left for Europe with his family. Members of the club welcomed Cooper back in 1833 with yet another dinner invitation. But when he returned, Cooper’s instinct was to eschew most acquaintances for the company of the Jay family. Peter Augustus Jay’s oldest daughter Anna Maria steps in to manage the Rye home after her mother’s death. In 1841 she marries Henry Evelyn Pierrepont “first citizen” of Brooklyn. Pierrepont is the oldest friend of Anna Maria’s brother-in-law, Henry Augustus DuBois and a frequent visitor to Rye dating back as early as 1834.

Their descendants will include diplomats, naval officers, photographers, art collectors, philanthropists and more.

Peter Augustus Jay dies in 1843. Upon learning of his death, members of the Philomathean Society, a literary and scientific society composed of free black New Yorkers, including Boston Crummell (father of W. E. B. DuBois mentor Alexander Crummell) black journalist Philip A. Bell, and abolitionist William A. Tyson gathered to pay tribute to a man who in their words had been “such a benefactor of our despised race.” They resolved to convey their condolences to his family and lamented that “In the demise of Peter Augustus Jay Esq., society has lost an invaluable member, humanity an undeviating advocate, the man of color a firm and tried friend, his country a true patriot and the world a philanthropist.”

John Clarkson Jay, a sailor and conchologist, moves to Rye in 1843