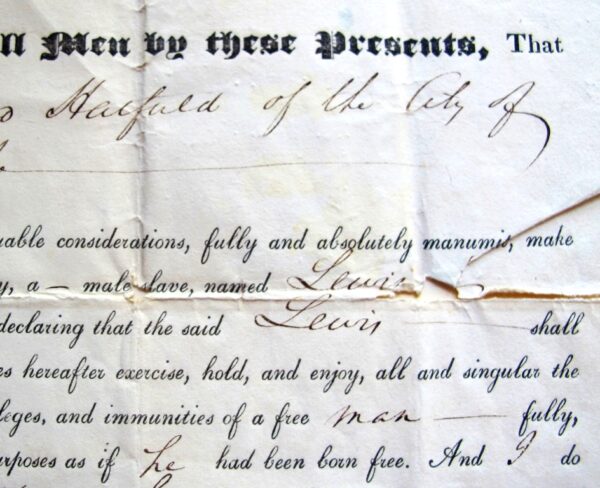 The Jay Heritage Center (JHC) is pleased to announce the generous gift of an original manumission document for its African-American History collection. The word “manumission” means to emancipate or free from bondage. Intact manumission documents like this one issued by a New York slaveholder are rare.

The public will get a chance to see the document for the first time on Sunday, October 21, at 3pm in connection with a free lecture by noted Lincoln historian, Harold Holzer. Holzer will speak about “Images of the Emancipation Proclamation” as part of JHC commemoration of the 150th Anniversary of the Civil War. (Read more about the event and see photos here)

In this instance, the signatory freeing a slave known only by the name of “Lewis,” is identified as Richard Hatfield, Jr. Hatfield was the son of a leading lawyer, Richard Hatfield, Sr. (1750 -1813) a delegate to the NY State Convention that ratified the constitution. It is recorded that he inherited land (and presumably enslaved individuals) that stretched “from the Scarsdale or “Indian Line of Marked Trees” to, or almost to, the then Road to Rye Neck, (now Old Mamaroneck Road, Gedney Way and Mamaroneck Avenue). His property would have passed to his son, Richard Hatfield, Jr. who was an attorney as well.

Instruments like this one were often recorded in the Libers of Conveyances in the Recorder’s Office of the City of New York, usually at the request of the freed man or woman as an added protection. Another signature on the paper that merits interest is that of Richard Riker (1773-1842) who served as NY Recorder, prior to and after Peter Augustus Jay, the eldest son of John Jay. But unlike Jay and Jay’s fellow members of the NY Manumission Society who actively fought to end slave trafficking, Riker is rumored to have been complicit in the kidnapping of freed Black persons for purposes of selling them back into slavery. This document helps vividly narrate a chapter in African-American history when freedom was not only hard won but also uncertain to last; even elected officials could not be trusted to abide by legal writs.

The document was donated by Carol Ubosi nee Smith of the Purdy, Bell and Potter families who have resided in Westchester County since the 1700s. It was found in the 1980s by Ms. Ubosi’s mother, May Potter Smith, amongst several nineteenth century items in the attic of their family home in Harrison. Although this important story was carefully preserved in a family bible, it is still not known how “Lewis” was connected to the Purdy/Bell family of Harrison. A search for further information and context is ongoing.

Last fall, after contacting JHC president, Suzanne Clary for research help about the historic African-American Cemetery in Rye where her ancestors are buried, Ms. Ubosi expressed her interest in making the gift to JHC where it could be made available to area schools and scholars. Ms. Ubosi grew up in Mamaroneck and New Rochelle and lives in Silver Spring, Maryland. She attended Central State University in Ohio and has taught in White Plains and Silver Spring. She is presently working on a book about the genealogy of her family with Dr. Alesia McFadden, a historian of African American History. As an educator, Ms. Ubosi hopes this manumission document will shed some light on the rich history of African-Americans living in Westchester and inspire others to explore and share their own family heritage.

The Jay Heritage Center is equally delighted that this primary source will be shared with the many middle school history classes who regularly come through its doors to learn about African-American History in New York and Westchester. “When students ask us, ‘What does manumission mean?’ says Clary, “this remarkable document will tangibly show them one man’s transition from servitude to freedom almost 200 years ago. The mere fact of its existence demonstrates how precious this paper was to its owner and his descendants. For those families who will see it firsthand at our site it will prompt the necessary questions that are central to an ongoing discussion about the evolution of social justice in our country.” The Jay Heritage Center has been a member site of Westchester County’s African-American Heritage Trail since 2004. John Jay and his family played active roles in abolishing slavery in New York.