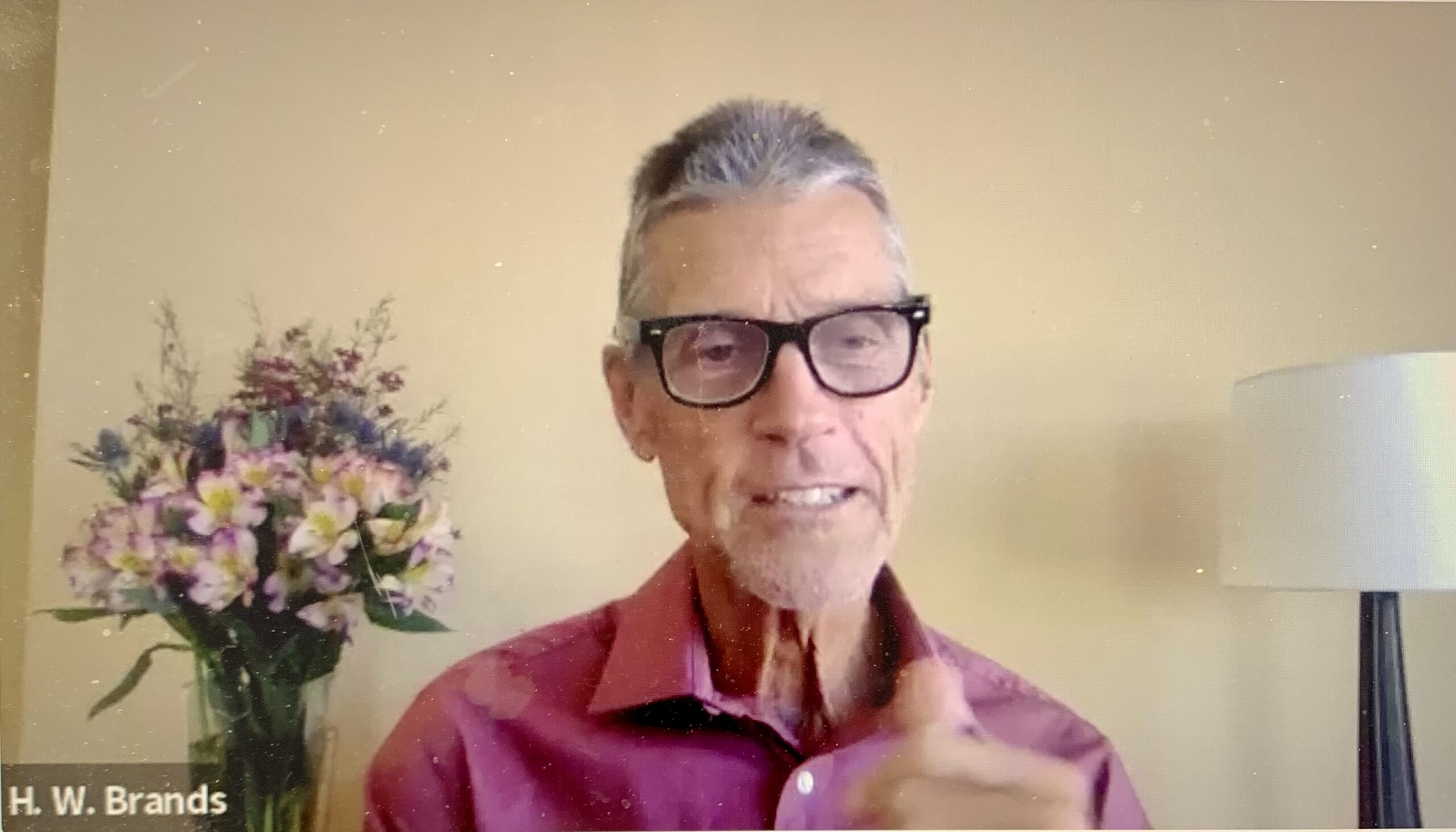 On Thursday, March 24, at 7 p.m., JHC was thrilled to welcome best-selling historian and two-time Pulitzer finalist H.W. Brands, for a virtual conversation about his new book, “Our First Civil War: Patriots and Loyalists in the American Revolution.” The program drew more than 100 registrants.

An acclaimed historian and professor, Brands is the author of 30 books, including “The First American: The Life and Times of Benjamin Franklin” and “Traitor to His Class: The Privileged Life and Radical Presidency of Franklin Delano Roosevelt“–both of which were finalists for the Pulitzer Prize in biography.

His new book, “Our First Civil War,” describes how, after the revolution, Patriots “were cast as heroes and founding fathers while the Loyalists were relegated to bit parts best forgotten.” Brands’s book, by contrast, “reminds us that before America could win its revolution against Britain, the patriots had to win a bitter civil war against family, neighbors, and friends”–and illustrates how “Native Americans and the enslaved were also forced to choose sides as civil war broke out around them.”

Best-selling historian Nathaniel Philbrick, who is also speaking at JHC this May, described Brands’s new book as “a sleek, riveting one-volume account of the American Revolution that speaks compellingly to our current age of division and discord. A bravura performance by one of our great historical storytellers.”

Dr. H.W. Brands (official bio):
Dr. H. W. Brands was born in Portland, Oregon, where he lived until he went to California for college. He attended Stanford University and studied history and mathematics. After graduating he became a traveling salesman, with a territory that spanned the West from the Pacific to Colorado. His wanderlust diminished after several trips across the Great Basin, and he turned to sales of a different sort, namely teaching.

He has written thirty books, coauthored or edited five others, and published dozens of articles and scores of reviews. His articles have appeared in the New York Times, the Wall Street Journal, the Washington Post, the International Herald Tribune, the Boston Globe, the Atlantic Monthly, the Smithsonian, the National Interest, the American Historical Review, the Journal of American History, the Political Science Quarterly, American History, and many other newspapers, magazines and journals. His writings have received critical and popular acclaim. The First American and Traitor to His Class were finalists for the Pulitzer Prize and the Los Angeles Times Prize. Several of his books have been bestsellers.

Brands is a member of various honorary societies, including the Society of American Historians and the Philosophical Society of Texas. He is a regular guest on national radio and television programs, and is frequently interviewed by the American and foreign press. His writings have been published in several countries and translated into German, French, Russian, Chinese, Japanese, and Korean.