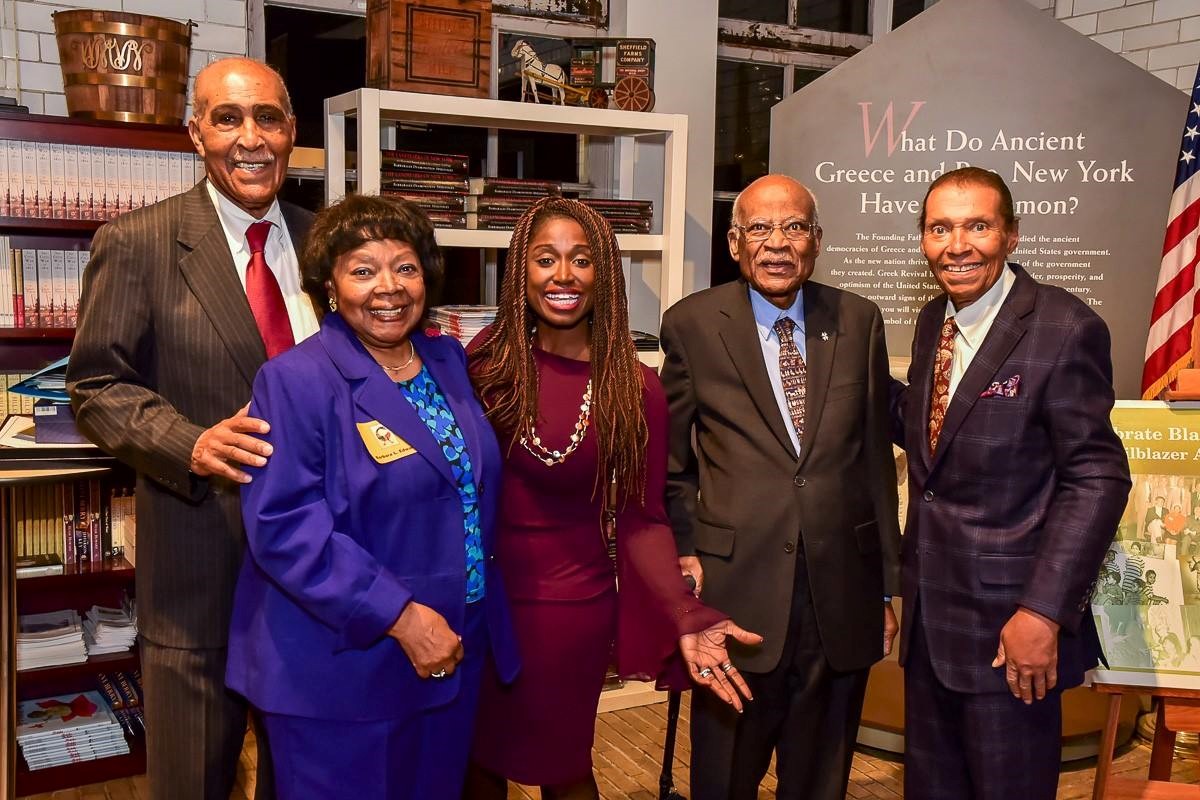 The Jay Heritage Center was proud to host the 20th anniversary of this exceptional Black History Month event on February 28th from 5:30 – 8:30 pm. Once again, the African American Heritage Advisory Board  presented awards to iconic African American citizens who have made significant contributions to Westchester County and beyond. An inspiring video tribute served as the centerpiece of the evening, along with the special artistic talent of young people.

Barbara Edwards, Chair of the African American Advisory Board, reflected on another celebration of the valuable contributions of the African American community in Westchester. “As we celebrate the victories of men and women who believed in the idea of a just and fair America, we remember that, throughout history, our success has been driven by bold individuals who were willing to speak out and change the status quo,” said Edwards. “Black Americans’ beautiful legacy of courage, sacrifice and integrity in the face of injustice continues to move our country closer to fulfilling its promise.”

This years honorees were:

Dr. Julius Ford was the Vice President and Dean of Students at Westchester Community College from 1975-2007. For over three decades, his distinguished career was one of keen concern, compassion and advocacy for students. He is credited with helping thousands of students solve problems ranging from disputes over grades, to the inability to pay for required books for class. His office was always known as a safe haven where students were treated with kindness, warmth, understanding and empathy.

Ford was responsible for providing leadership, vision and direction for a comprehensive program of services designed to meet the needs and goals of a diverse student body. Ford supervised a number of departments including Admission, Student Activities and Student Life, Counseling and Academic Advisement, Financial Aid, Health Services, Registration and Records, Career and Transfer Center, the Women’s Center, Child Care Center and Judicial Affairs. Before WCC, Ford was an administrator, counselor and adjunct instructor at Queensborough Community College of the City University of New York.

He was a member of the Westchester County African American Advisory Board and has received many awards and recognitions for his services to the community. Ford holds an Ed.D. in Student Personnel Service Administration, and a Masters degree in Psychology from Columbia University, Teachers College. He lives in Cortlandt Manor with his wife Emily Veale. Together they have five adult children and seven grandchildren.

Dr. Kenneth Forde spent his entire professional career at Columbia University. Forde helped pioneer the use of endoscopy as a diagnostic and surgical tool and was a member of one of the research teams that first recognized the increased prevalence of polyps in first-degree relatives of colon cancer patients, leading to the recommendation of routine colonoscopy screenings for this high-risk group. Forde is heralded for raising awareness of colon cancer nationwide, performing a colonoscopy on Katie Couric on the “Today Show” in 2000.

As Co Editor-in-Chief of the International Journal Surgical Endoscopy for over 10 years, Forde has over 180 publications. A graduate of the College of Physicians and Surgeons of Columbia University, Forde received the Gold Medal for Excellence in Clinical Medicine from the Alumni Association, and the Arnold P. Gold Foundation Award for Humanism from the College. Forde is the Jose M. Ferrer Professor Emeritus of Surgery at Columbia University College of Physicians and Surgeons.

Dr. Kerline Marcelin is a Board-Certified Ophthalmologist and fellowship-trained glaucoma specialist and surgeon. Marceline earned her medical degree from Mount Sinai School of Medicine, during which time she received a research grant from the National Medical Association and National Institutes of Health in biochemical neuroscience research.

Marcelin has practiced in Westchester County for almost 20 years, specializing in comprehensive ophthalmology with a sub-specialty focus on the diagnosis and management (medical and surgical) of both routine and complex glaucoma. Marcelin holds academic appointments at Mount Sinai School of Medicine and Albert Einstein College of Medicine. Before entering private practice, Marceline served as the Director of Glaucoma Services at Jacobi Hospital/North Central Bronx Hospital Systems, and Catholic Medical Center in Queens.

In addition to training and mentoring ophthalmology residents in glaucoma and cataract surgery, Marcelin has participated in medical missions to Haiti and is a founding member of the Vision Restoration Project, a not-for-profit medical group that organizes doctors and community health workers to serve the Hispanic and Haitian communities of the Caribbean Island of Hispaniola. Marcelin is a member of several professional organizations in ophthalmology and has hospital affiliations with New York Presbyterian-Hudson Valley Hospital, and New York Eye and Ear Infirmary of Mount Sinai. She resides in Westchester County with her husband Richard Couch and her twin children, Camilla and Camden.

JOHN SHEARER The Gordon Parks Award for the Arts

John Shearer is a photographer, writer, producer, director, lecturer and professor; a true renaissance man fashioned in the mold of his idol, Gordon Parks. Gordon Parks was the first African American staff photographer at LIFE, and Shearer was the second at just 17 years old. Shearer is known as one of the youngest staff photographers ever hired by a major publication when “Look” magazine first engaged his services. Shearer covered a number of historic events ranging from the civil rights marches in the South, to the race riots of the turbulent 1960’s.

One of Shearer’s classic picture stories for LIFE was his 1971 coverage of the first of three Muhammed Ali vs. Joe Frazier fights, billed as the “Fight of the Century.” The unbeaten Frazier won by unanimous decision as he handed Ali the first defeat of his professional career, but it was the added dimensions of politics, religion and race that caught the attention of hundreds of millions of people throughout the world, many of whom had never seen a professional boxing match.

Among Shearer’s most important stories was his coverage of the Attica Prison riots in 1972. Shearer was the only photographer allowed inside the prison during the assault by New York law enforcement officials, and many of his pictures were used in countless court cases by inmates and prison guards brought against the state.

Shearer has won 175 national photography awards, including “Photographer of the Year” in 1972. His work has been exhibited in the Metropolitan Museum of Art, the Museum of Modern Art and the Whitney Museum, in addition to other cultural institutions.

Read about the past 5 celebrations here: